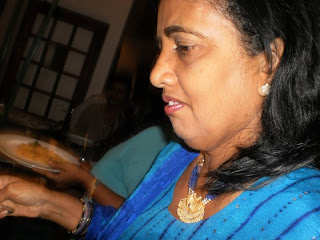 ROTARY CLUB OF COLOMBO
FUND RAISER FOR THE CANCER EARLY DETECTION CENTRE PROJECT
On the 25th of January, 2012, on behalf of the Rotary Club of Colombo, Rotary Ann Shanthi of the Club, carried out a fund raiser in the form of a Sing Along at the Hotel Galadari with Sohan & the X’periments in attendance.  As part of the fund raising activity, Ann  Shanthi communicated with all Rotarians and Rotary Anns of her Club as well as her friends and family here and abroad for contributions. For the Sing Along ,500 tickets were printed and as an added source of income 2000 raffle tickets were also printed, all of which were sold due mostly to the efforts of Ann Shanthi. In order to maximize profits, all the gifts for the Entrance Ticket Draw and the Raffle tickets were donated by Rotarians and Anns of the Colombo club in response to an appeal made by Ann Shanthi. Even the Principle Sponsor was found by a Senior Rotarian.
Proving that fund raising for a worthy project is possible, even in these difficult times, if the commitment and perseverance of even one person is present, Ann Shanthi’s efforts yielded a net profit of Rs. 2.3 million. A few photos are shown below.
Posted by rotarycolombo.blogspot.com at 12:08 PM